Can you really bounce back from failure? 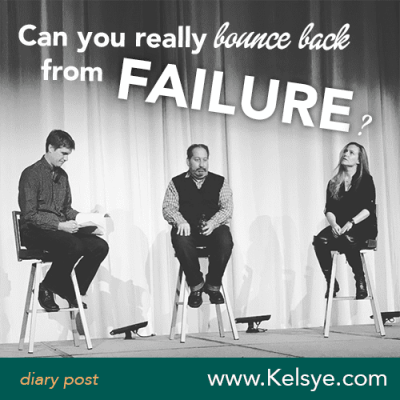 Imagine how honored I felt when asked to speak on the main stage at Geekwire's Startup Day? The request made me giddy. I've long admired the Geekwire crew and the articles they produce. They needed someone with expertise in failure. Uh, thanks for thinking of me guys.

Yet how could I turn down the opportunity? Everyone loves the story of a fallen hero, and I've certainly fulfilled the "fallen" part of that criteria plenty of times. More compelling, I would be speaking to a crowd of about 700 entrepreneurial souls, many who have had their own experiences with failure and some who have their best and biggest failures still to come. If we fear failure, we will fail to endeavor, which would be the biggest loss of all.

In the interest of transparency, community and shared experience, I climbed up onto the tall stool on the stage at the Meydenbauer Center and spoke as open and honestly as I could about the failure of my beloved startup, Writer.ly.

Writer.ly was an online marketplace of publishing services. We connected authors and publishers with the freelancers they need to publish and market their books. We earned our money by taking a small commission on the jobs awarded through the site. We bootstrapped, graduated from the Founder Institute incubator and earned angel funding. Our run was about three years.

There's an arc, of course. Every story about a failed startup is really a story about a whole collection of wild successes and tragic loses. In the scheme of things, we did well. We survived Founders Institute. We had 1200 users and our first revenue in the first month we launched. We beat out hundreds of other startups to pitch on a stage in San Francisco, where we got out first angel investor. Then we got another, and another. We kept winning pitch contests, or coming very close to first.

I scored a lunch with Guy Kawasaki - an idol of mine since Art of the Start. He didn't just validate our idea, but he signed up as an advisor on the spot, bringing along two more publishing experts. He gave us his booth at Book Expo in New York, where he highlighted us in his keynote speech.

Suddenly we had over 4,000 users, and another angel, and another! And OMG, f* you gender bias and outrageous odds, we're really going to make this thing go!!!!

Our revenue stalled. Authors needed more guidance than our DIY marketplace provided. The tech firm we gave most of our money to delivered a site that was a fraction of what we'd contracted. They also managed to break our intrepid MVP site of shame, so that for a week all money transactions happened in a virtual sandbox, but not in the real world. We had no more angel money. We needed to pivot, but to do so meant betraying our community of indie writers and focusing on the few with big bucks and the means to do well no matter what.

At this point, I was almost three years in, and very very tired. I was drawn to startups because I hate having to be at a particular place at a particular time. Now I had to be everywhere all of the time. My family had existed on minimum income for many years. They were sick of me always having something crucially important to do that would take all my attention and energy.

Personally, the breaking point for me came when I realized that if I started from scratch with all the learning and experience I'd gained, in one year, I could be further than this company would be in three. It was time to make my exit.

So what happened next?

No, I did not bounce back from failure lickety-split. Recovering from the death of a dream held tight-fast for many years was no simple or quick process for me. On the Geekwire stage, I shared how I got my mojo back. Click play on the video below and take a listen.

I love the fact that you were brave enough to share your "failure" with everyone. I think most of us would cringe and not want to discuss how we've failed, opting to share how we've succeeded instead. It was a good point that you made when you said "if we fear failure, we will fail to endeavor, which would be the biggest loss of all."

We definitely should not be afraid to fail. It's part of the process. It's how we learn. And we can always bounce back ten times stronger than before. Great post and video. Keep it up!

That takes guts, pal. The death of a dream indeed. I think my recovery is ongoing, but a new spark is present after years of licking my wounds, taking a bridge job, and wondering if I could launch again. I'm proud of you and also congrats on the GeekWire panel! I'm sure that was both difficult and rewarding. Thanks for sharing your story. See you on the Twitters... 🙂